The fourth section of his epic journey along the South West Coast Path, took Richard Langley around the Lizard Pennisula to Looe in Cornwall …

Using the community campsite at Kuggar for a couple of nights I completed the  Lizard section of the walk. I used the bus link from Helston to get me from Helston to the start points of each day.

After completing each day’s walk I’d return to Helston, popping in at  The Anchor pub next to the bus for some liquid refreshment after end of each day. It was by far the best pub on the entire walk.  For anyone visiting the pub I particularly recommend the ‘middle’ beer.

The walk from Portleven past Mullion Cove was fairly easy with long stretches of low cliffs looking down on never ending sandy beaches.

Heading towards Lizard Point I passed through Kynance Cove and onto the Predannack cliffs where the path became exposed with outlooks  to some of the most stunning sea views in the UK.

The flora, unusual geology and turquoise sea colours were unforgettable. 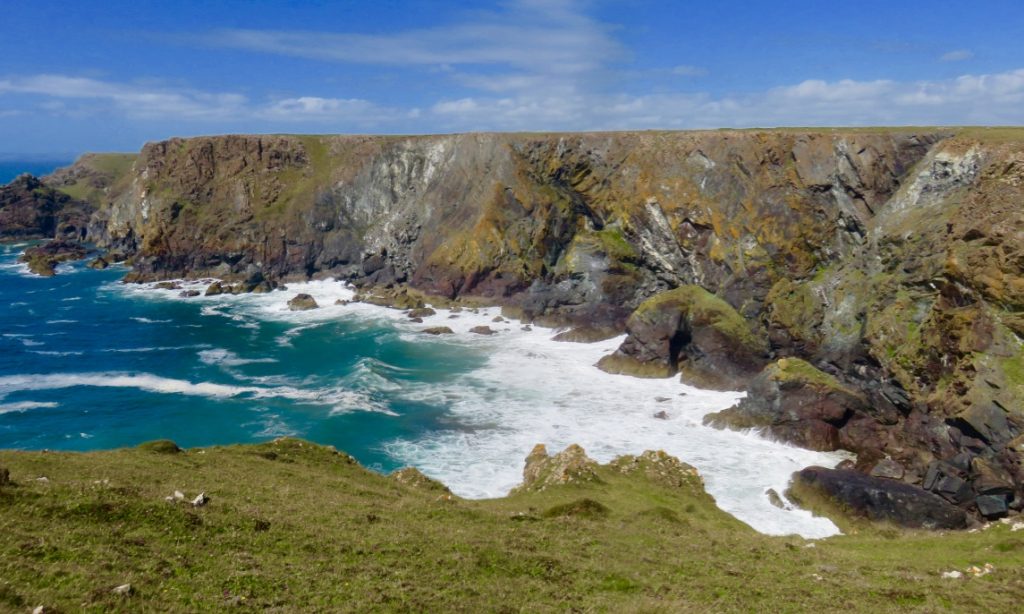 The plan was to get to the Helford River passage in a day and get the Ferry across.

The path was easy and Coverack was a great place to stop for lunch.

But it became clear that the Helford River passage was going to be out of the question due to ferry and tide timings.

On to Falmouth and St Mawes

Porthallow seemed a good place to stay as an alternative along the way.

Just inland there was a wonderful organic cafe, ‘The Fat Apples Cafe.’ There was an orchard and a  small campsite with limited space for a tent. It really was a great place to stay for a one night stop-over. Payment for the site was through an honesty box. This was a place to return too, maybe during the  day, and listen to the live music in the cafe. What a great place to find! 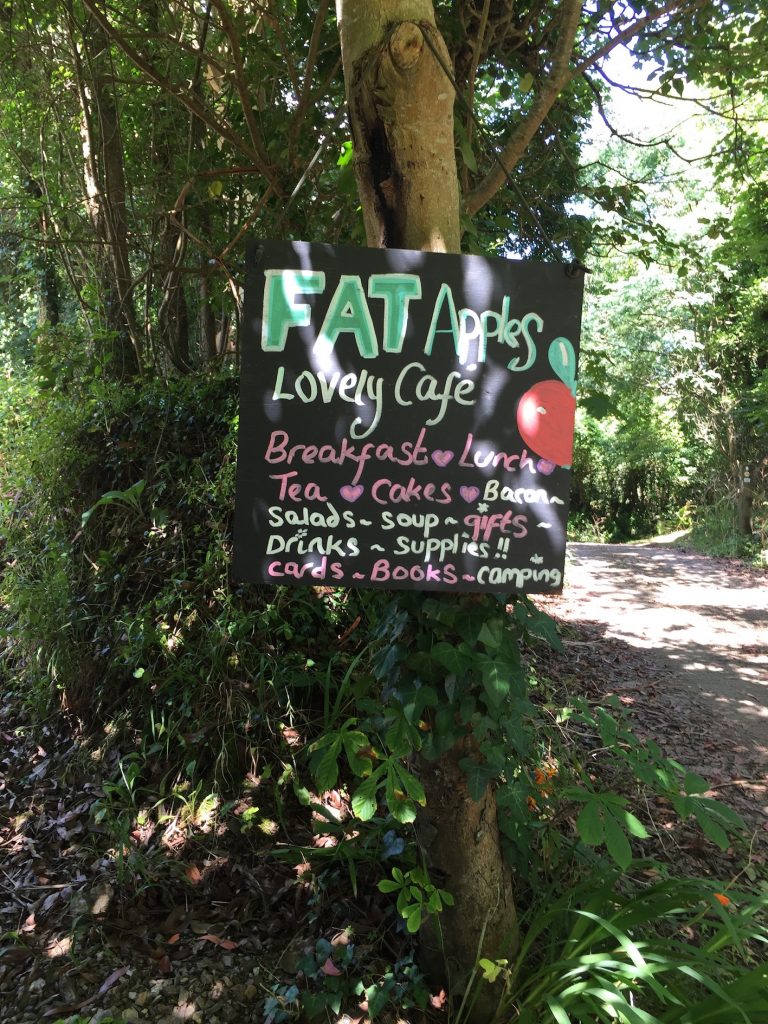 Porthallow was the half -way point of the South West Coast Path and a reminder of another 315 milles to go. The Lizard section was one of the best; seascape views, flora, geology and its own brewery with the Chough Pint being the best I tried. 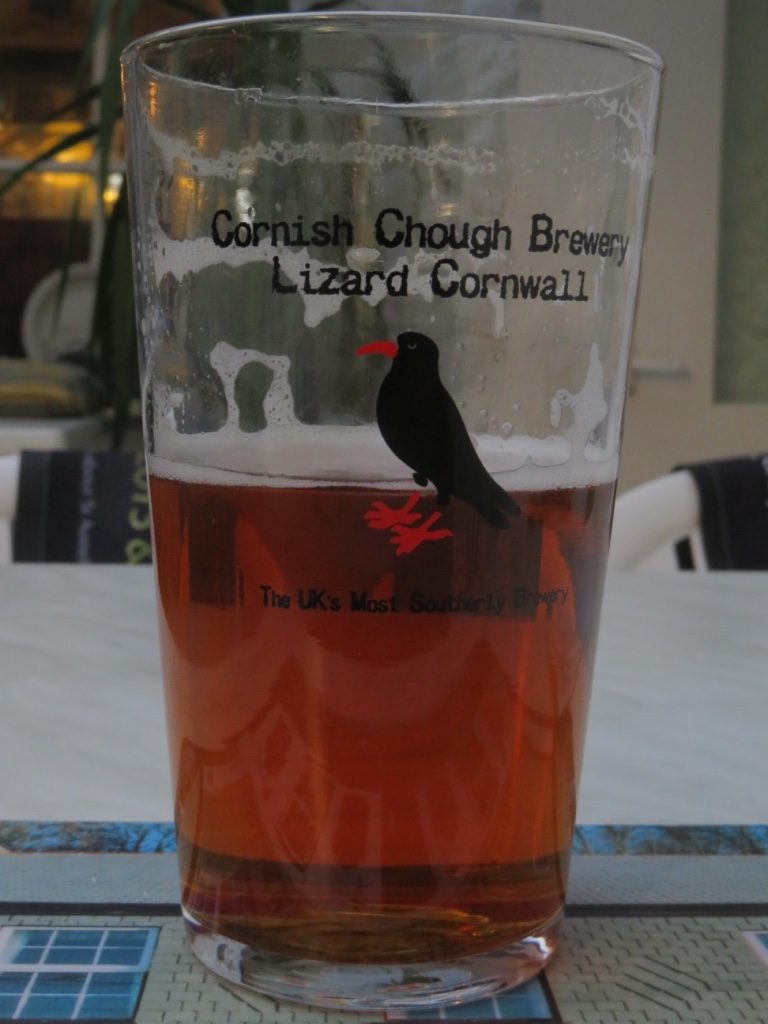 It was still a long walk all the way round to the Helford River Crossing and once I got there, there were no ferries across due to the tide, I managed to call a taxi and camped overnight in the community campsite near Mawgan.

I used the same taxi again the next morning to get back to the opposite side of the river crossing and thus began a new day’s trek, this time to Falmouth and beyond to camp across the river near St Mawes.

This meant another river crossing over the Fal. The ferries were cancelled for several hours due to the Falmouth Carnival events which included the most amazing display by the Red Arrows. It was awe inspiring to witness this on a beautiful clear day. The flags were stiff against the breeze with the backdrop of red, white and blue vapour weaving their patterns through the bunting and flags. It really did make the hairs on my neck stand up.

On the other side of the river Fal it was difficult to find a campsite and it got very late. However, at almost midnight I pitched up wild in the grounds of the Old Castle in St Mawes. There was another river crossing from St Mawes next morning to Pace and from there the walk was ever onwards in the direction of Mevagissey.

The walk from Place to Portcathoo was straighforward and wooded for much of the way, this was so much easier than many of the strenuous stretches, so I began to pick up the pace.

Towards the late afternoon the lovely beach at Pendower came into view. What a great place for a swim, I thought!

After my dip, I found the Shallikabooky. This was the best cafe along the route. A great proprietor and wonderful green tea with homemade organic scones. It was one off the highlights of the walk. The cafe had the most amazing views, was spotlessly clean and the food was A Mazing! –  I’ll have to return their soon! 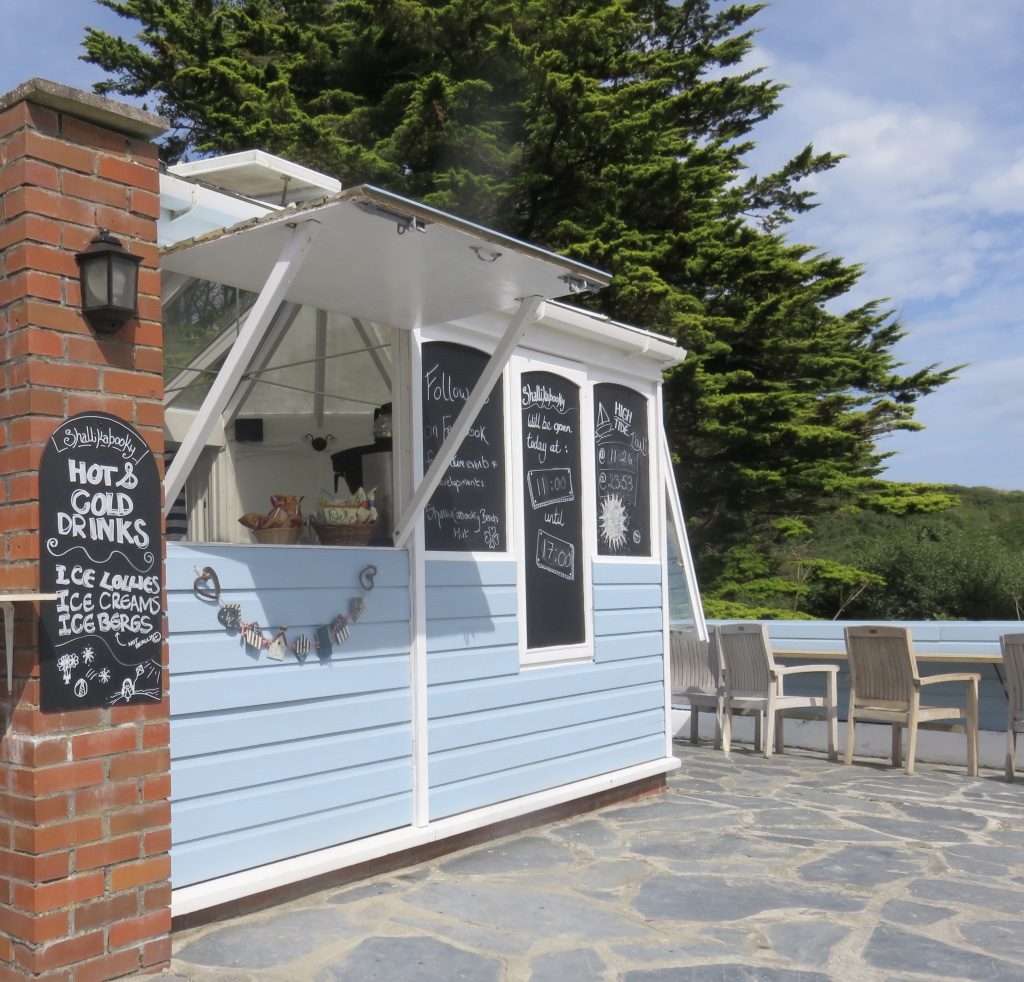 From Pendower the walk was long and getting more strenuous. It was late in the evening and I made the decision to set up for a wild camp on Dodman Point.

It was a fabulous clear evening. Just when I was settling down there were voices, torches and runners along the cliff edge. It wasn’t until the next morning in Gorran Haven when I came across a check point to learn about the RAT run ( Roseland August Trail ) which  was a race where you could choose to run 100K 60K, 30K or 10k. all starting in Falmouth.

There were over a thousand competitors. Those that interrupted my slumber were the 100k runners, doing a lot of the run in the dark – incredible!

From Gorren Haven to Mevagissey was fairly easy but there was a target to get to the River Fowey and thence over on another ferry to Polruan. It was a long, long way to Fowey with the blisters and thigh cramps coming back with a vengeance.

Through Fowey to Looe

I got lucky and found a B & B on the outskirts of Fowey. It was a great walk and the section over Gribbin Head was stunning. I had a great supper with a few beers and the cramps and blisters just melted away.

The walk from Polruan and on to Looe was immense but not too strenuous.

Along the way there was the added incentive to get to Looe and meet my old ex apprentice mates. They were coming down from Coventry to join me and then walk together  on to Plymouth. It drove me on through the cramps and blisters and with a full back pack it was tough. Somehow, Looe seemed the most magical place. Without an arranged meeting place, it was amazing to meet in the first pub I staggered into. They had a B & B  booked and fortunately they had room  for me too.

We all had a great night together and were well set for the two day walk on to Plymouth the next morning. 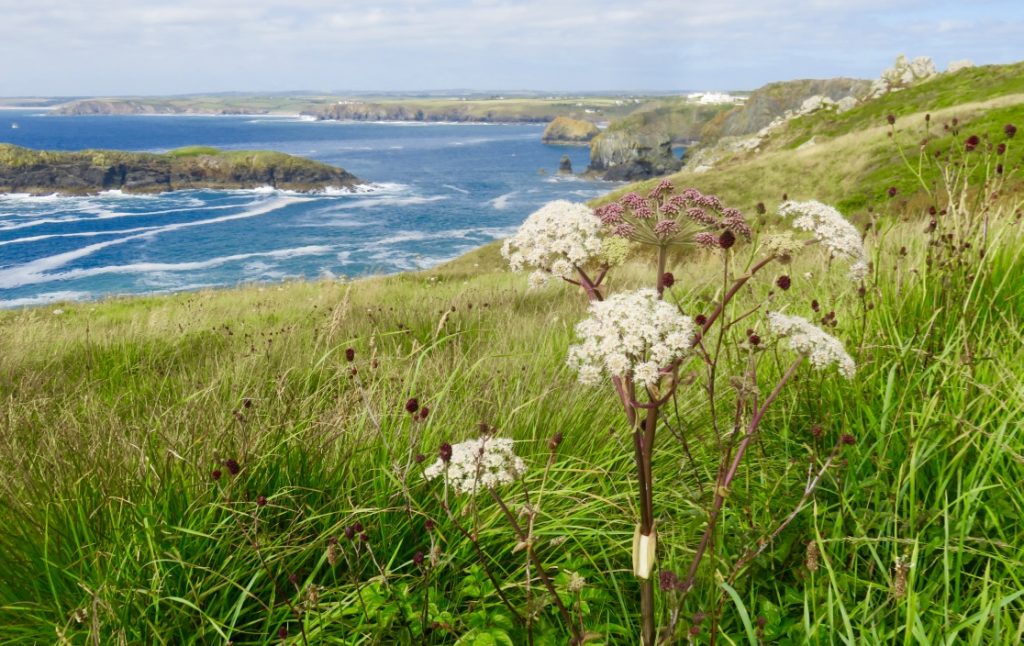 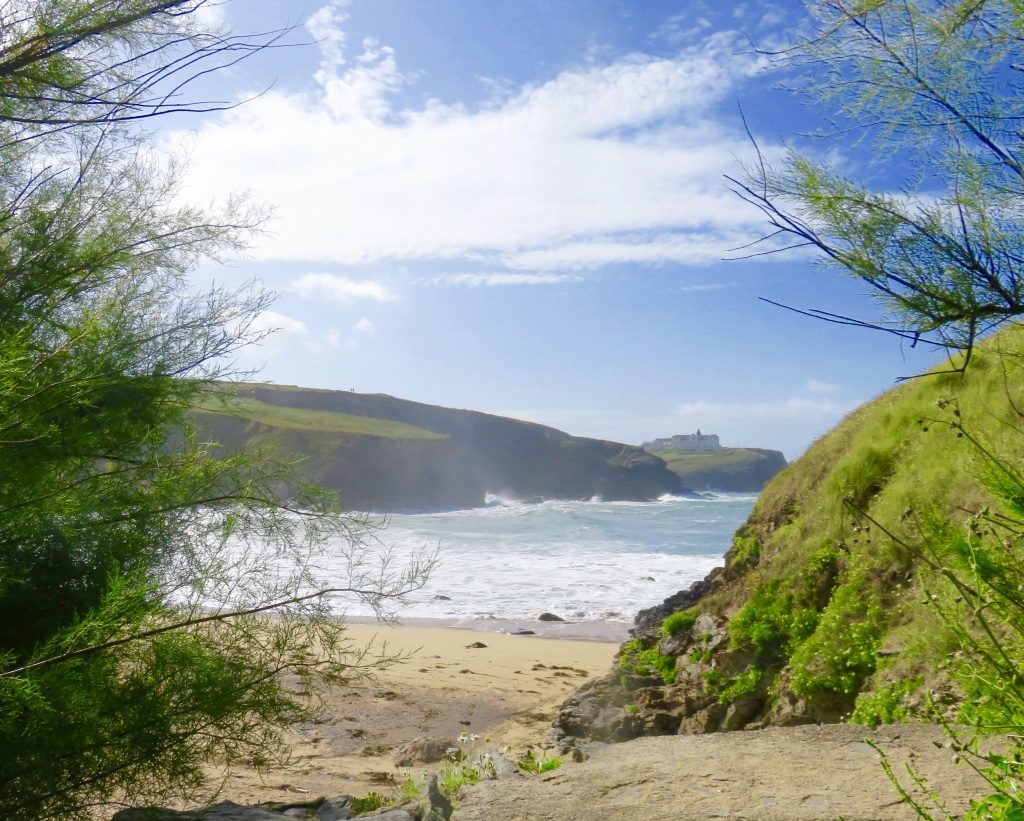 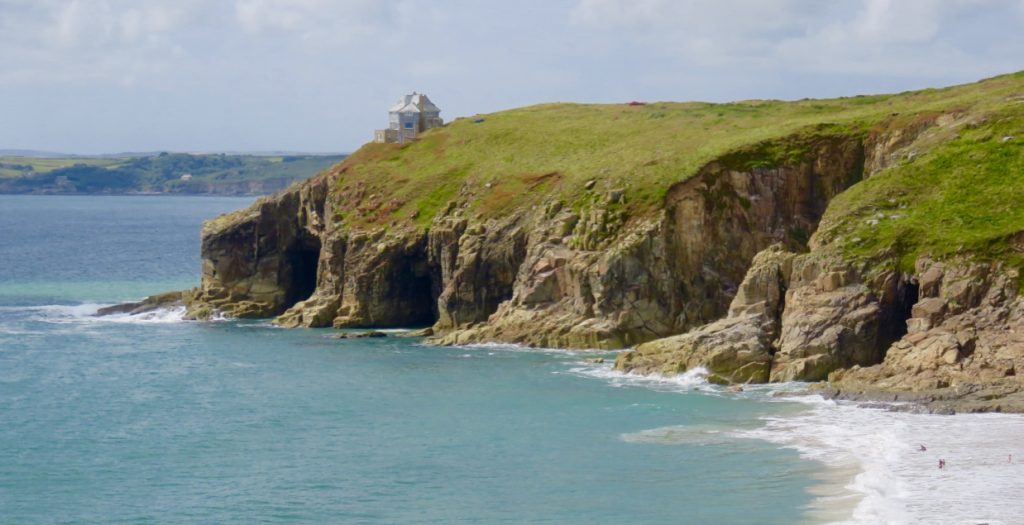 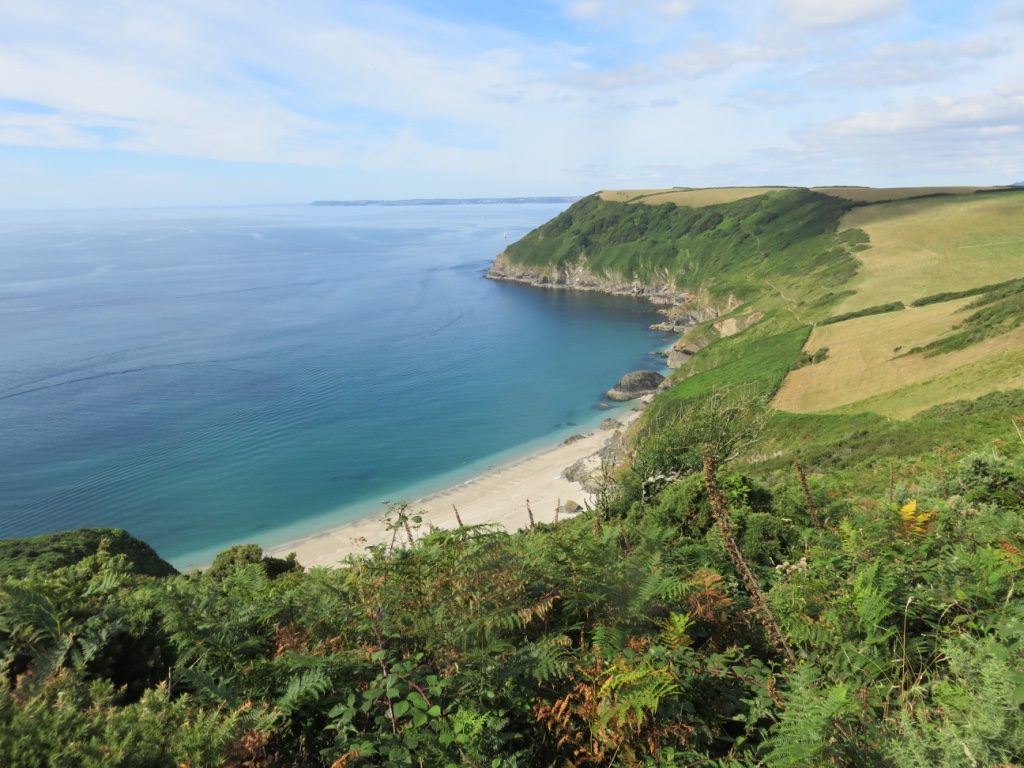