A varied five mile walk with spectacular views of Wensleydale and Ryedale taking in Hawes End, Countersett and Semer Water.

Bainbridge was once a major Roman dwelling and fort. Today it’s pretty as a picture, and lies four miles east of Hawes, the main town in Wensleydale.

Park up near the centre of the village. There’s usually a parking space somewhere around the main green.

If you’ve approached from the main road (A684) walk down through and across the green. You’ll pass some medieval stocks and a couple of tea shops.

At the far end of the green take the road to the right, signposted for Countersett.

As soon as the road leaves the village it climbs steeply.  Take a rest and look behind you to enjoy some great views of Wensleydale.

After around half a mile there’s a track to the right with a signpost showing that it’s five and half miles to Beggerman’s Road (the road that heads south from Hawes). 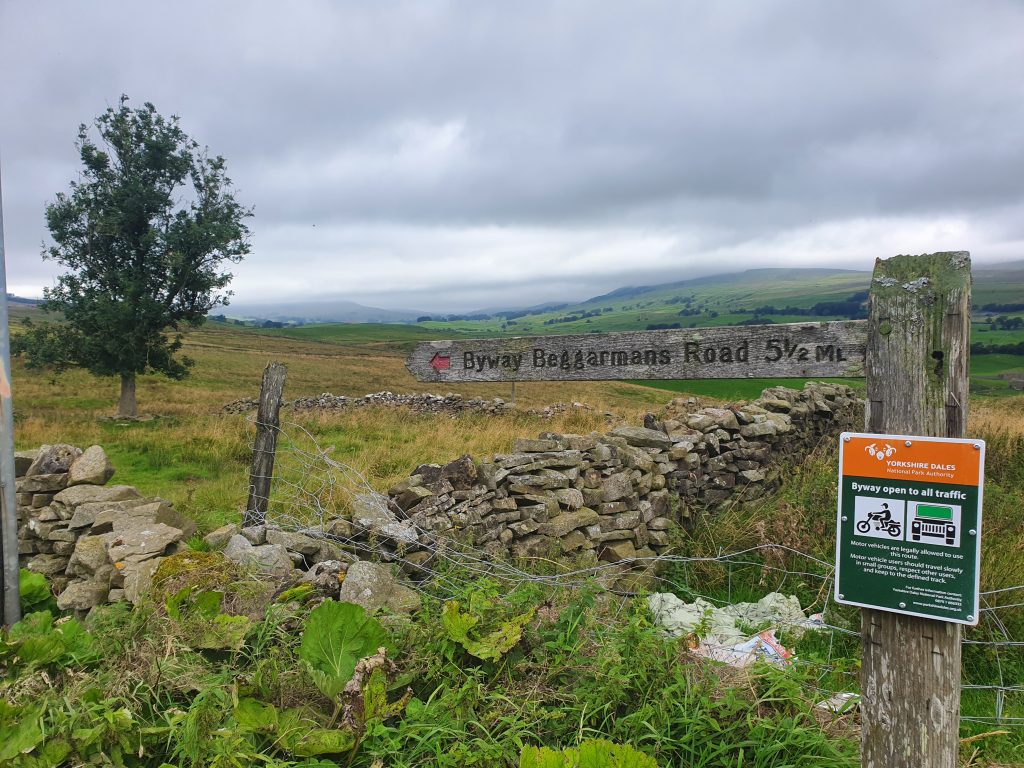 This track looks very straight. It is because it’s the old Roman road called the Cam High Road.

Walking along the Cam High Road is harder work than it looks. Your legs soon feel the uneven surface and gradual ascent as the track heads directly towards Weather Fell. 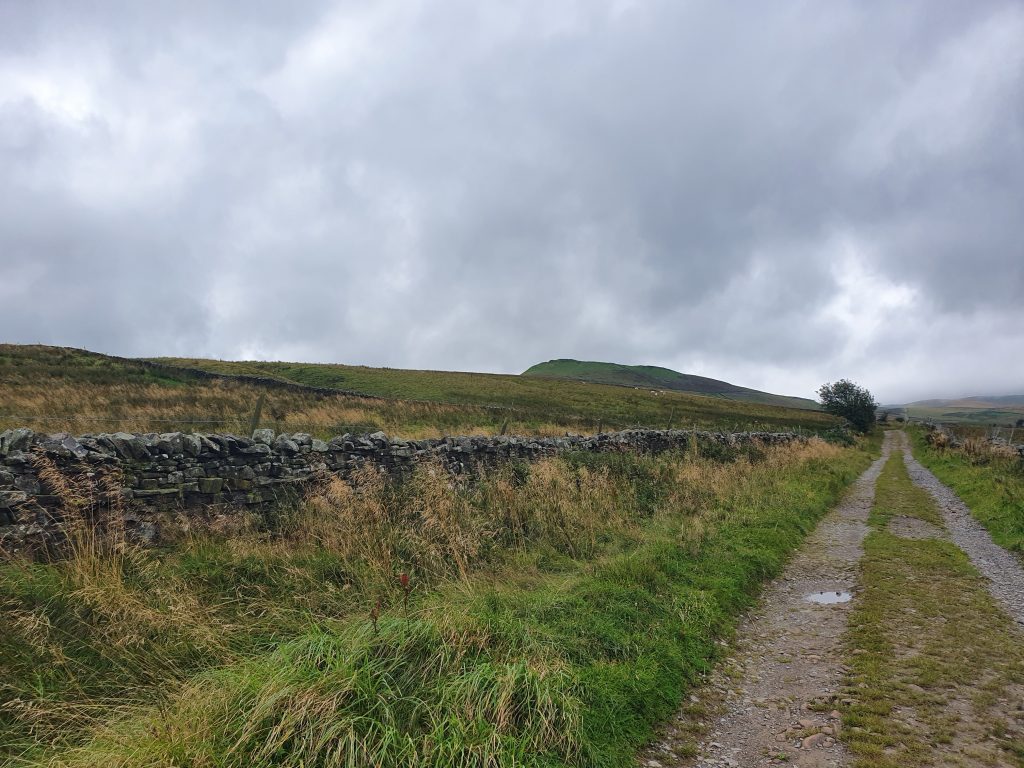 After a mile and a half your track crosses a tarmacked road. Turn left here. You are now facing almost in the opposite direction. The road continues to climb as it skirts the edge of a small but prominent fell called Green Scar.

After five minutes you reach Hawes End. Stop to take in the views. To the south you can now see the small village of Countersett behind you, and Semer Water and the Ryedale valley beyond it.

You can follow the road down to the village. Alternatively, you can cut the corner by following a footpath which is marked. 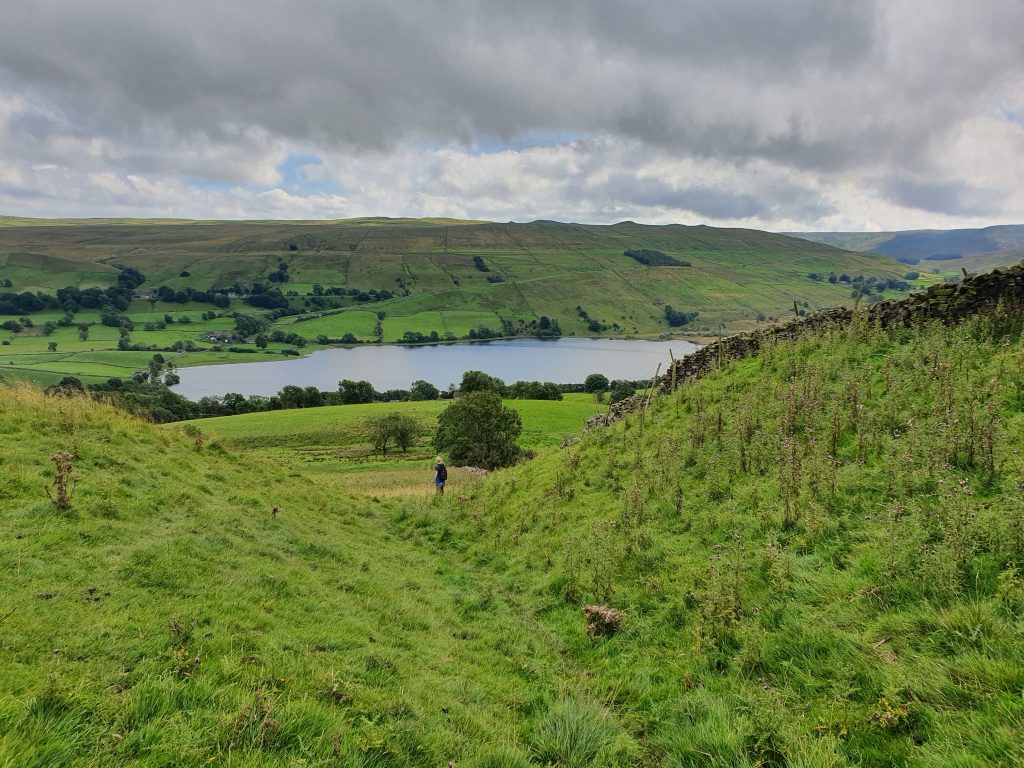 The footpath crosses fields and a small stream before reaching Countersett. There are benches to rest at and admire the view while you look down the Ryedale valley. When you are ready you then follow the steep road down to the edge of Semer Water, the second largest tarn or lake in the Yorkshire Dales. 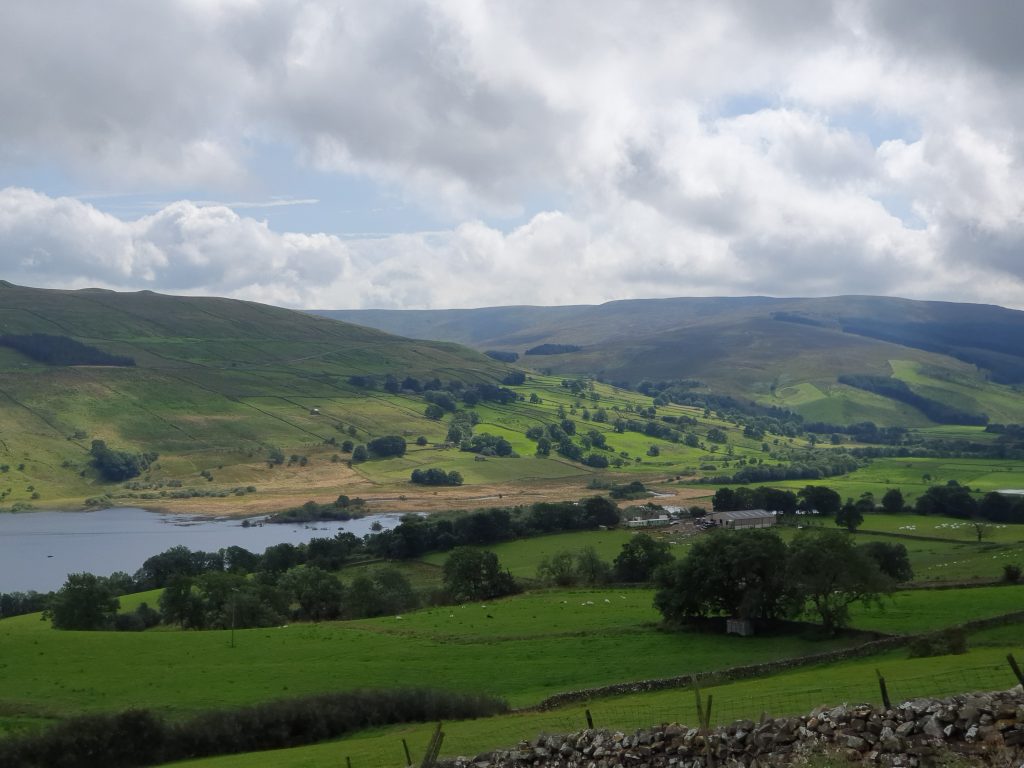 After crossing a bridge you find yourself at the Water’s shoreline. 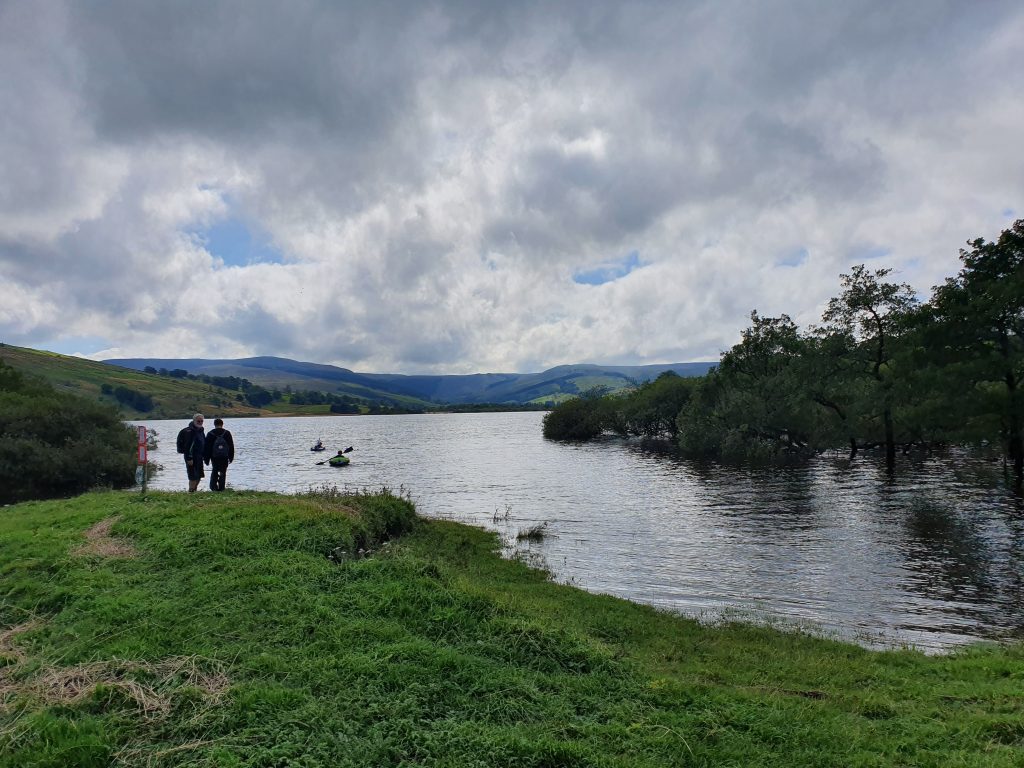 On fine days this area is a hive of activity with swimmers and kayakers sharing the grassy shoreline to get in and out of the water.

Don’t walk along the road that follows the contour of the Water. Rather, take the path to the left immediately after the bridge, and start walking away from Semer Water along the banks of the River Bain which, at one and a half miles long, is reputed to be England’s shortest river.

The path now follows the river for half a mile and then cuts across a field as it heads up and over Bracken Hill. 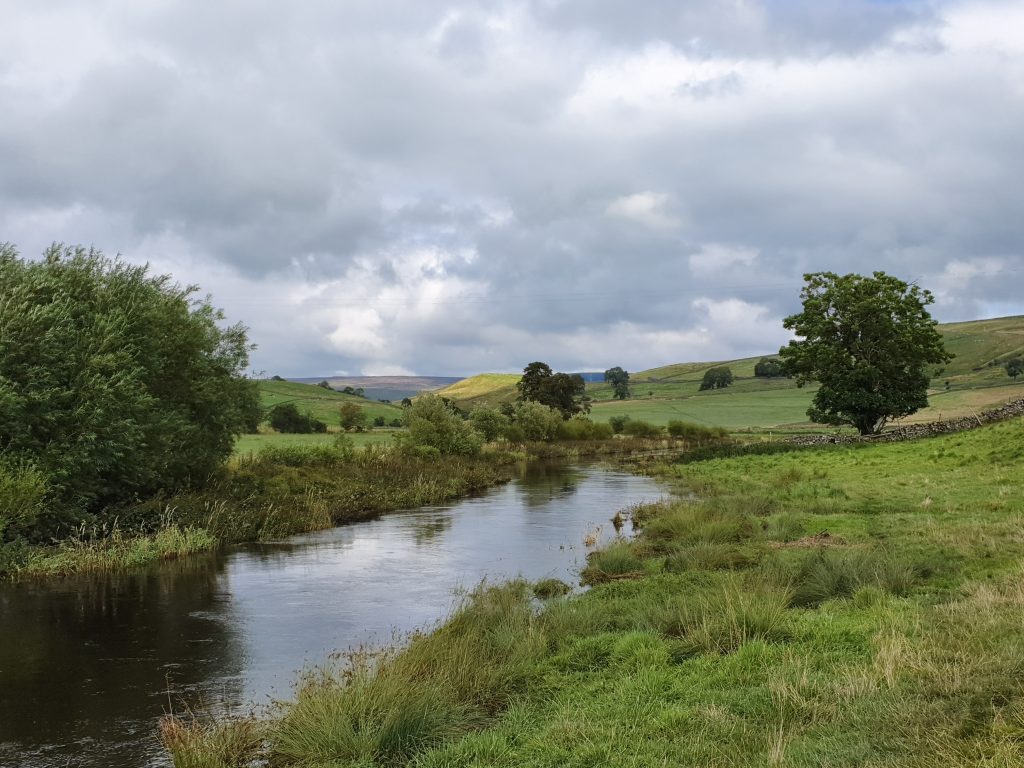 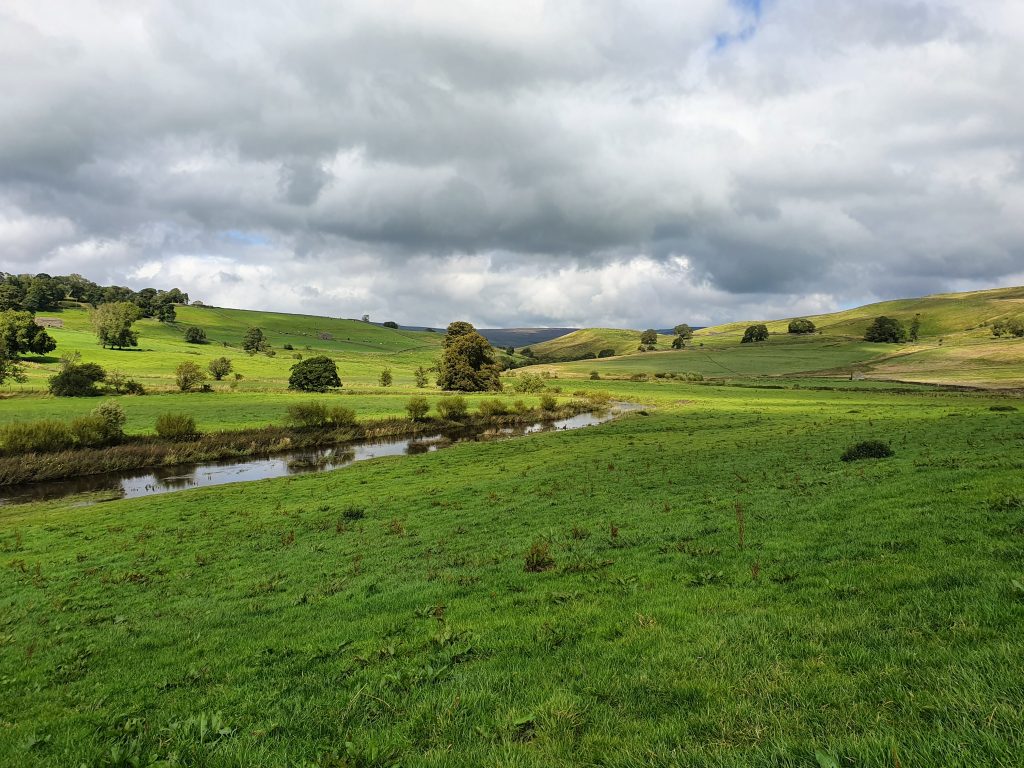 At the top of the hill follow the path as it heads towards Bainbridge which is now in sight. 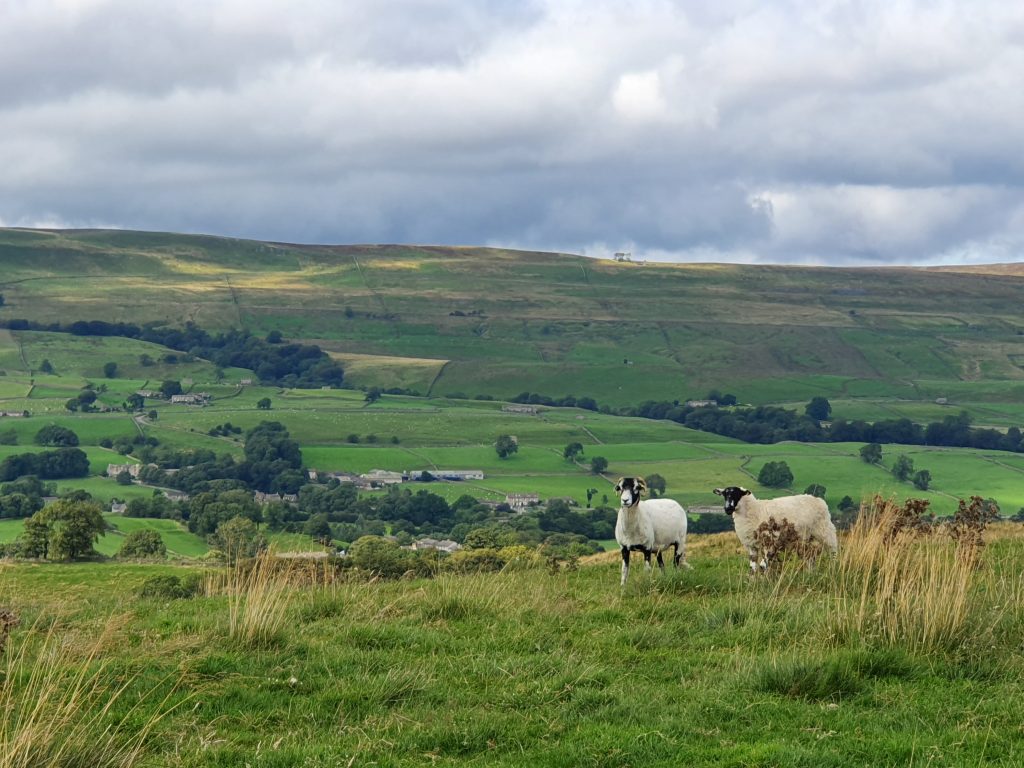 The path joins one road which, in turn, joins another as you descend now, quite quickly.

You are now back on the main road (A684) and cross over the River Ure before reaching Bainbridge’s main green, from where you started.

A circular walk from Bainbridge to Semer Water, Wensleydale.